The HathiTrust Digital Library has added the previously missing cover to the 1969 News & Letters pamphlet “Two Articles on New Emerging Forces.” This publication contains two texts by Raya Dunayevskaya, “The Arab-Israeli Collision, the World Powers and the Struggle for the Minds of Men,” on the 1967 war and “U.S. and Russia Enter Middle East Cockpit, on Iraq, circa 1969. 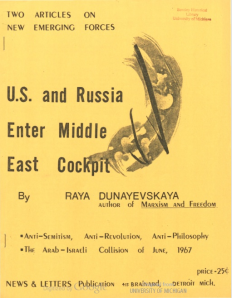 This 1967 text, in particular, establishes the outlines of Dunayevskaya’s principled position on the Middle East. This excerpt, in which she reminds us of the Stalinist origin of the anti-Semitism of the post-war era, is characteristic:

“It is Stalin who set the foundations when, in place of the class struggle, he had declared that the whole postwar world was now divided into but two camps: his, which he called ‘socialist’, and ‘the others’, which he called imperialist. Moreover, the very specifics of anti-Semitism were spelled out by him. The anti-Semitism of Russian Communism came to the surface in the last years of Stalin’s life not alone because of Israel, but, above all, because he had to contend with the true internationalism of Russia’s returning soldiers—workers, peasants and intellectuals—who had seen ‘the West’ and now asked what is so different about Russian Communism. Whereupon Stalin discovered that the new ‘enemy’ was ‘Zionism’, the ‘rootless cosmopolitans’. Everyone from the Jewish doctors whom he was plotting to frame in Russia, to the Communist leader Slansky in Czechoslovakia— were all accused of being either ‘rootless cosmopolitans’, or ‘Zionists’, and very often both.”